Suzy Silliman, SVP, Data Strategy and Sales at NRS commented, “NRS same-store sales data for October showed strong consumer demand, with robust year over year and sequential increases. The rate of increase in the cost of the most popular items also increased significantly, suggesting that inflationary pressures are still building in this slice of the retail market.” 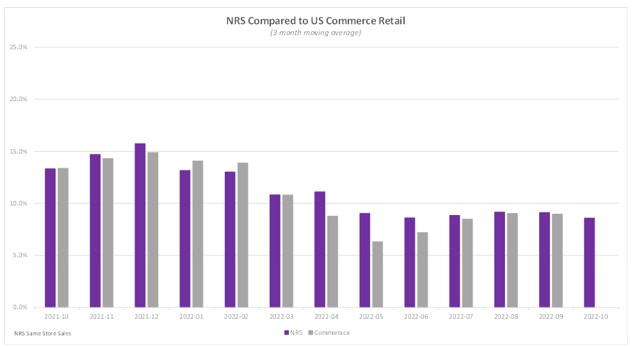 The NRSInsights data have not been adjusted to reflect inflation, demographic distributions, seasonal buying patterns, item substitution, or other factors that may facilitate comparisons to other periods, to other same-store retail sales data, or to the US Commerce Department’s retail data.

Same-store data comparisons of October 2022 with October 2021 are derived from approximately 122 million transactions processed through the 11,616 stores on the NRS network that scanned transactions in both months.

NRS operates the largest POS network for independent retailers in the US, aggregating data from over 20,000 active POS terminals operating in over 17,000 independent retail stores. Its platform predominantly serves urban, small-format, independent, retail stores including convenience stores, bodegas, liquor stores, grocers, and tobacco and sundries sellers. The network includes retailers in all 50 states and in 190 of the 210 designated market areas (DMAs) in the US. Over the past twelve months, NRS’ POS terminals processed $12.6 billion in sales through approximately 910 million transactions.

All statements above that are not purely about historical facts, including, but not limited to, those in which we use the words “believe,” “anticipate,” “expect,” “plan,” “intend,” “estimate,” “target” and similar expressions, are forward-looking statements within the meaning of the Private Securities Litigation Reform Act of 1995. While these forward-looking statements represent our current judgment of what may happen in the future, actual results may differ materially from the results expressed or implied by these statements due to numerous important factors. Our filings with the SEC provide detailed information on such statements and risks, and should be consulted along with this release. To the extent permitted under applicable law, IDT assumes no obligation to update any forward-looking statements.